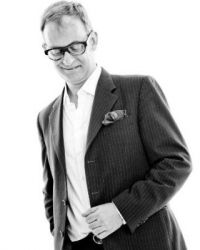 Benoit Ams is an recognized expert on Doing Business in an Asian context, a best-selling author on China and an inspiring entrepreneur.

After an early banking career in London in the nineties, Benoit worked for the Belgian Ministry of Foreign Affairs in Sydney (Australia). He was awarded the title of “Laureate of the Prize of the Ministry of Foreign Trade” for his contribution to promote “Made in Belgium” lifestyle brands in Australia. He then worked as a management consultant for various organizations, including Belgian luxury brand Delvaux.

He was then awarded a scholarship to study at the prestigious Beijing Foreign Studies University (Beijing, People’s Republic of China) for 15 months as part of the programme EU-China JMTP.

Subsequently, he set up a nationwide premium food distribution company representing the specialty brands portfolio of Inbev and Kraft in China, headquartered in Shanghai with offices in Beijing, Shenzhen and Hong-Kong. He managed the company for more than five years until 2007. During these five years, he gained, being the only foreigner in the company, a deep understanding of the specifics of the Chinese business culture.

Benoit’s acclaimed books “Les Nouvelles Pratiques du Business en Chine”, and “Doing Business in China” based on his experiences as an entrepreneur in China, launched him into his present career as a facilitator of communication and cooperation between Western and Asian companies. Now based in Hong Kong, Benoit has spent the last decade helping senior executives and management teams of some of the largest and best known global companies to operate more effectively in Asia. He is specifically interested in the areas of management and leadership in multi-cultural settings, including the issues of talent motivation, talent retention and team-building in cross-cultural settings.

Benoit has also been involved in negotiation and conflict resolution in Asia for many years, and has developed a particular expertise in the field of cross-cultural disputes. He consequently gained accreditation as a mediator from the HKIAC and HKMAAL, in 2015. He is also member of the mediator list of the International Chamber of Commerce (Paris, France).

He is also interested in the field of corporate governance in multicultural settings and holds several mandates as independent director or board observer. In 2014, he was appointed a Fellow Member of the Hong-Kong Institute of Directors (HKIoD).

Benoit is also an advisor to the European Commission and a former director of EU-China Managers Association.

Benoit is a passionate entrepreneur and is currently involved in several start-ups in Asia. He is also the founder of eco-luxury accessories brand Smith & Norbu.

Benoit holds a Master degree from Brussels' Solvay Business School, a higher education teaching certificate from the University of Brussels, a professional diploma from Beijing Foreign Language University, as well as certificates from Hong-Kong University, SDA Bocconi (Milan), and Ecole Centrale (Paris) respectively in the field of mediation, International Leadership and Organizational Behavior and Philosophy.

Based in Hong-Kong, he speaks Mandarin Chinese and English in addition to his native French.